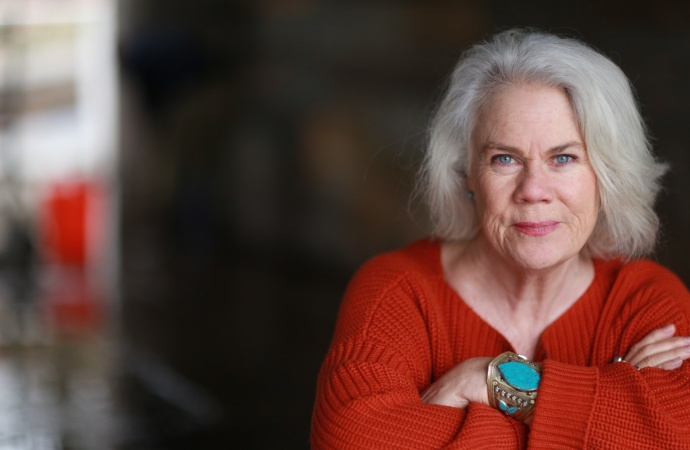 Bookings, Auditions, Inspirations, Stories of the Month and more!

In the 70s, we were told to go with the flow.*  So since admirable people said that to us, we said that’s a good thing, yeah man, cool, let’s go with the flow.  Even Carly Simon and James Taylor sang it to us in her song MOCKINGBIRD - ride with the tide and go with the flow.  And if James and Carly sang it, it was truth.  Did we actually go with the flow?  I don’t really know.  It’s said if you remember the 70s you weren’t there.  It seemed easier then to accomplish such a thing, but did we?  It’s been a long time since the 70s and this go with the flow is not anywhere near a new concept for me.  Yet, I find myself always a newcomer to it.

Each unexpected moment (and Zen tells us each moment should be so - o that THAT be so!), gives me a little intake of breath, a hold, then a slow breath out as I contemplate the unexpected.  Some unexpecteds take more than one cycle of the breath in, the hold, the breath out.  And when there’s a part of me that wants to wrassle with the unexpected, I have various approaches to coax the Wrassler into yes.

Then sometimes the unexpected is easy and I do actually get to go with its flow.

The day before Good Friday I received a feature film audition invitation from a casting director through Actors Access in response to a self-submission from a few days earlier.  It turns out my manager had, of course, submitted me as well, but the CD contacted me directly.  While an awful lot of actors don’t play the Actors Access game, or if they do, they feel it’s a waste of time, I am eager to self-submit.  Good things, including bookings, have come to me from self-submitting.  And nothing bad has ever come to me, so I self-submit.  The audition invitation was for the next day - Good Friday.  My first thought was “O good, an audition” and then the Wrassler in me chimed in “Wait a minute.  Who holds auditions on Good Friday?  This is a waste of time.”  Well, I always try reason with my Wrassler first before banning her to the hinterlands, so I reason: “Let’s see who the casting director is.  O, a very good casting director, a busy casting director.” Wrassler repiies: “it’s probably not a worthy project.”  Me to Wrassler: “And what’s worthy? Never mind, Wrassler, don’t bother to answer.  Hush up.  We’re going.” Banned to the hinterlands, the Wrassler goes but only to return at some point - usually unexpectedly in the middle of a joyous occasion.  It’s inevitable.

It’s so inevitable that my shrink has dubbed my Wrassler the “Tyne Daly Demeanor,” as in I can expect demeanings daily.  Tyne Daly because we both think I’d be a great understudy for Ms Daly, not because we expect Ms Daly to be a Demeanor.  It’s just a funny way to kinda break up the seriousness of the Wrassler, who is most definitely a Demeanor.  And for you readers thinking a shrink is a silly thing, you need one.

In prepping the scene for the audition, it comes to me that this character, Sandy the shopkeep of Cherry Grove on Fire Island, has a pink splash in her hair.  I mean, it’s Cherry Grove, right? Pink hair would be a conservative look in The Grove.  OK, easy enough to get one of my clip-in extensions and arrive at the CD’s office wearing it.  I can always remove it if the CD wants. Waiting to be called in with the CD, the office assistants were playing the very very very best of the 70s music and I was bopping and humming and mouthing words vs going over my lines.  C’mon, having fun has to be a part of it, right?  And if I don’t know the scene by ten minutes before my appointment, I’m never going to know it.  So why not enjoy, like even … uh … go with the flow?  And would you believe upon greeting me, the CD said “I love the pink in your hair!” I agreed I liked it too, admitting Sandy seemed to find it important, and assured him it was easy to remove if necessary. He wanted it to stay.  So it stayed.

A lovely audition experience ensued.  Can we always say that?  Nope.  But we hopefully can often say that.  Hopefully.  I hadn’t been called into this CD’s office before and found him to be smart, attentive, thoughtful, and generous, easily seeing why he is busy.  Can we always say that?  Nope.  Truth be told, I can rarely say that, but I audition nonetheless usually under whatever circumstances are presented.  That’s going with the flow. I think.

Let me praise him a bit more; these seldom-praised CDs deserve it.  After my first take he quietly said, “OK that’s rehearsal.  Let’s do it again.”  I can think of a another CD - a favorite of mine - who has absolutely no audition manners saying bluntly: “OK, again; just clean it up this time,” while at the same time cueing me to immediately begin again.  I don’t take that personally; it’s just her style and she’s also a busy CD and seems to believe more in volume auditions vs thoughtful auditions.  She always casts well, so it works … for her.  Her flow may be a little rougher than many, but I go with it best I can.  The second take he said, “Great.  Now, what if I told you your character might be a little suspicious of the other character in the scene?”  I said, “hmmm, let me think about that for a minute.”  (I try to always say that.  It never takes a minute, but I always want to think about it.  And when I’m ready to proceed with another take, since it’s been only a few seconds, they’re always relieved.  Now, every once in a very rare while a CD will say, “No, let’s just go again now.”  And if I have my wits about me - and I most often do - I slowly step out of frame of the camera pretending to not have heard the unsupportive demand, then return to frame when I’m ready.  That’s a David Cady trick I learned once and never let go of.  That’s called creating the flow and going with it.  And David should know how to work a CD, having been one for a gazillion years before he turned to full-time teaching.)

But back to the hmmmm, let me think about that for a minute … before I was ready to retake the scene, I told him I thought that was a really smart suggestion, that I had felt that something just a little something was missing when I was preparing the scene and couldn’t come up with it so let it go, but here was the something just a little something I was looking for and now the whole thing made good sense to me.  I was ready to read.  He wasn’t.  This CD actually took the time to say “Now, look, don’t misunderstand.  Your read was great.  I’m just interested in seeing what this idea does to you.  But your read was great.” Nice. Great way to get great work from an auditioning actress and make that actress eager to return for any future auditions. This CD is now added to my favorites.

Two days later I got the offer “You’re their first choice and they love the pink hair.”  I gladly accepted the offer, said I’d bring the pink hair to the job, and I think that’s all probably going with the flow.

Two days from shoot date, the character I play called Sandy is getting ready and has more to say.  She’s happy with the pink hair but also wants blue nails.  I haven’t painted my nails (I only do so for a character) in three years - Maria in Charles Mee’s SUMMERTIME demanded long painted rusty nails and she got them for the run of the show.  So Sandy has both finger and toe nails painted blue, much to the high delight of my nail helper who is continually disappointed each time I say “not today, Zoe,” in response to her always-eager “color today?” Why the toes?  Ahhhhh, the shoot is actually on location and the weather is predicted sunny and near 80.  I’m thinkin’ Sandy’s feet gotta get a little sandy, right?  Well, we’ll just go with the flow as to whether we get Sandy’s toes to the sand or not and my money’s on the flow heading directly to shore’s edge. Wanna bet?

And for your listening pleasure: 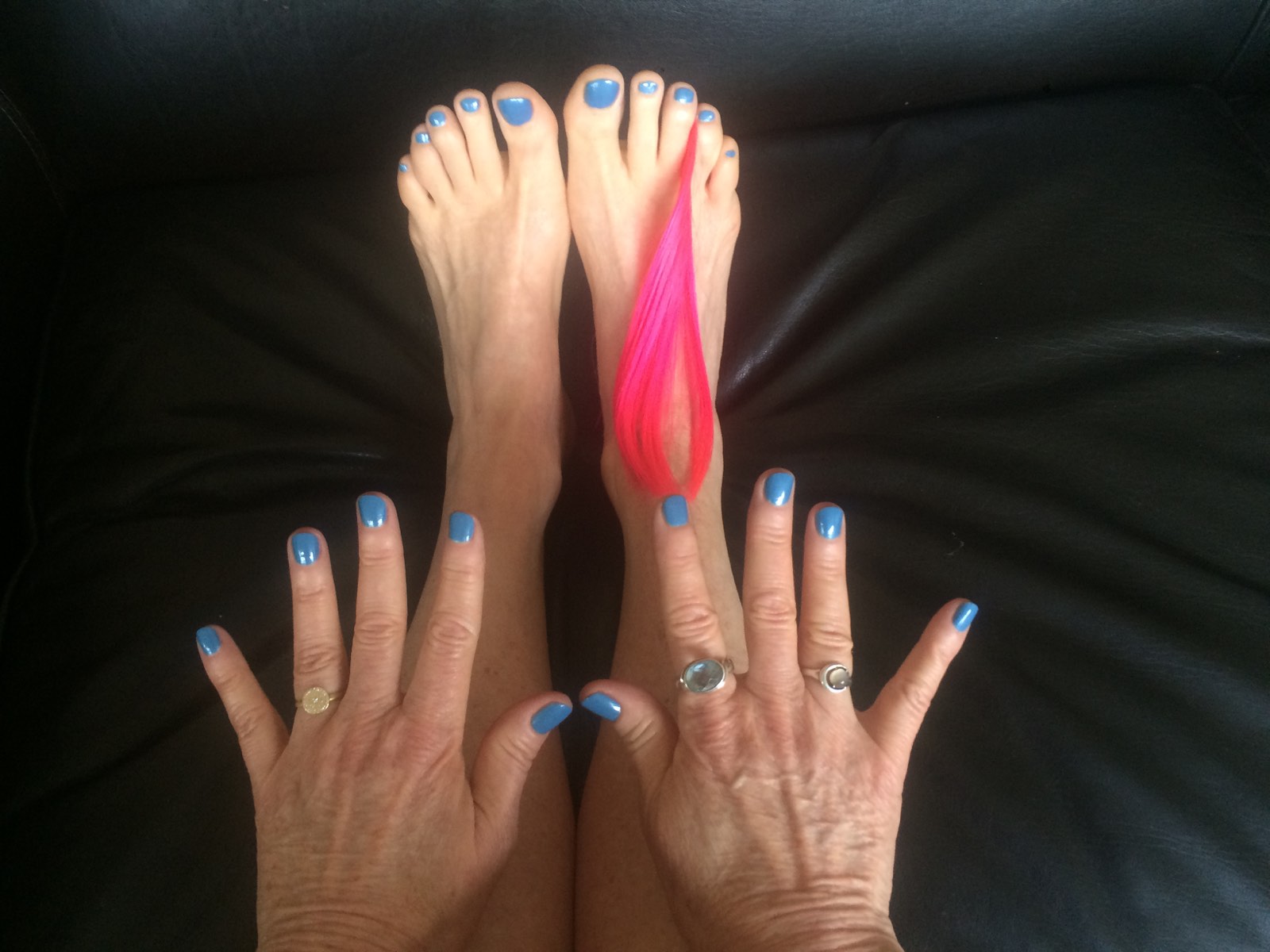